Saturday, we got out early and went to the small but bright and modern Torvehallerne market hall, two glass and steel halls filled with bakeries, coffee shops, overpriced fish and produce, and imported gourmet items. We had a delightful breakfast of cinnamon rolls and coffee, sitting out in the cool air and sunshine before heading out to Louisiana.

Louisiana is a state in the USA, but it is also a museum of modern art, about 45 minutes by train up the coast from Copenhagen. The founder of the private museum named it after his three sequential wives, all named Louise, which must have been the “Betty” of its time. Anyway, the museum is a lovely, understated work of Danish modern architecture in its own right, filled with whitewashed brick, glass, and light wood, ranging across and around a grassy bowl leading to a rocky shore of the Baltic. Surprisingly good cross section of works, lots of outdoor sculptures by Joan Miro, and some really engaging exhibits by newer artists.

Really,  a world-class museum, which brings together the collections, the architecture, and the landscape better than any other museum I know. (J Paul Getty comes close but the whole thing is too citadel-like). They also had a great cafe in a garden conservatory with a seaside deck, and we ate some smoked cod Smørrelbrod (open faced sandwiches) there. At the gift shop, Saori picked up some nice sunglasses and I bought a bottle opener by a Danish designer.

We spent nearly a half day there before walking back to the local station and catching the train back to Copenhagen. The metro system and regional train system is fantastic. Easy to use, clear, multilingual ticket machines. The stations are more like Apple stores with the clean gray Scandinavian modernism. The automated metro trains are closer to glass tubes, wide and tall enough to drive in a SmartCar. The only failing is they have no connection to the main station, and not enough stations (but construction is underway on a third ring line).

And bicycles, everywhere. Beijing or Shanghai might rival Copenhagen in this regard, but I noticed more here simply because of the dedicated separate bike lanes (with tiny traffic lights), and the sidewalks full of parked bicycles, locked only with a bar across the tires, and not actually attached to anything. In most American cities, I won’t even lock my bike to a bike rack which isn’t mechanically fastened to something permanent.

Back in the city, we ambled along the old citadel moats (look at Copenhagen on a map, it’s a city with a big star!) before hitting one of the main canals where we found a really cool place called Toldboden on the docks. It is basically a big warehouse with a bar and grill and buffet (and as I type this, I’m worried it sounds like a Sizzler) with lots of outdoor seating taking over the pier, and long wooden tables indoors with sheepskins over the benches. When we got there in the late afternoon, people were lounging and drinking white wine in deck chairs. It was a bit chilly so we grabbed a beer and a coffee and a seat by the windows so we could see out across the harbor to our next stop: dinner.

We caught the water bus across the canal and disembarked in a clean but industrial area on a rusted folded steel dock, and walked along the harbor to the restaurant. I’d booked reservations at Amass only a few days before, so I was happy to have secured a table. The restaurant was in a converted warehouse, bright, concrete minimalism, light tile, candles burning on a stained concrete floor, high exposed structural ceiligs, black steel accents. We were seated immediately by the open air kitchen.

In the kitchen, the head chef stood at a stainless steel counter at the head of the room and made notes on the orders coming in. He would say things like “two squid!” or “regular menu, no nuts!” and all the cooks would shout in unison “Yes, chef!” It was a bit theatrical, and there was something that felt like it was a reality kitchen show, but it was still fun.

We opted for the regular set menu of six courses, and just one glass of wine each. Every course was brought out and explained to us personally by the cook who had made it. That’s pretty cool, it’s nice to be able to present your work and really stand behind it to the people who are consuming it.

Anyway, here is the menu we had:

and it was all pretty great. Best overall was the squid, enoki, and sweet potato, but they also had a fresh baked thick fermented potato bread from the grill, which was rich and chewy and perfect with the kale spread they served it with and they kept that coming.  The roasted tea ice cream was fantastic, subtle and sweet.

We were there for about three hours that passed pretty quickly. When I paid the bill, I reminded myself how much money we were saving by staying in a hostel instead of a hotel for three nights. Overall, a great experience, but not one I would do every trip to Copenhagen.

Caught the bus back to the city center, and then made our way back to the hostel. Taking the local busses makes me feel like I’m using the city in a more sophisticated the way. You have to figure out more geography and things like payment, but the reward is you can save yourself a lot of time and walking. They are also the cheapest city sightseeing tours possible. 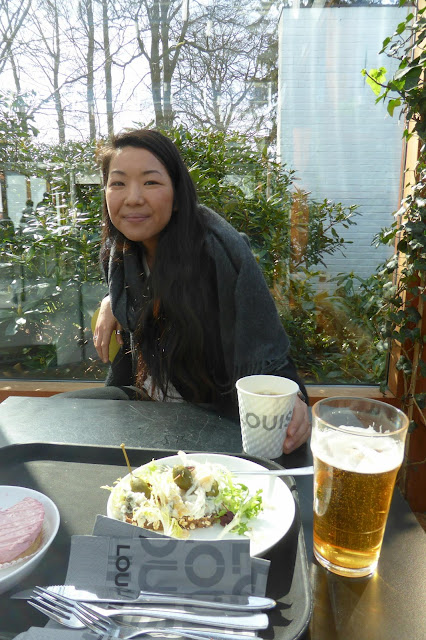