So there's this story out about an activist who is mysteriously found dead after allegedly receiving death threats from a NY supreme court judge whom the activist claimed he had some dirt on. One version of the story here:
http://blackstarnews.com/news/135/ARTICLE/7472/2011-06-20.html

There's not a lot of coverage- its mostly sensationalist blog postings about it, and a few fringe websites.

On the face of it, it seems unlikely that a state supreme court judge would issue death threats, and put out a hit on someone, then conspire with the aid of the NYPD to cover up the whole thing. It's not because I wouldn't put it past judges or the NYPD to kill someone and cover it up, but as a conspiracy the whole thing is flaky.

I started with the alleged New York City Death Certificate provided by a blog: 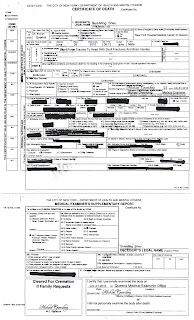 This is a really shady document, and I'm pretty satisfied that the whole thing was made on someone's computer. Take a look:
For me, the computer printing and the erased text is pretty damning. If this document is forged, then it leads me to question the whole story. I don't know how this guy died, but someone is pushing an agenda.
at April 12, 2012
Email ThisBlogThis!Share to TwitterShare to FacebookShare to Pinterest

I am the guy who posted the website and the death certificate.

I am also the friend of Sunny Sheu who went to the Office of Court Administration on June 23rd, 20102 to receive the document that proved the Judge's financial fraud.

I am also the person who went to identify Sunny Sheu's body three days later at the New York Hospital, Queens.

If you think that I created the death certificate on my computer, I suggest you make a FOIL request to the Chief Medical Examiner of New York City

Or just send the death certificate to the medical examiner and ask if it is genuine....

It will take you far less time than it did for you to concoct your conspiracy theory.

Every document on the www.sunnysheu.blogspot.com is authentic, as the the tiniest bit of journalistic diligence will confirm.

The original source of the Sunny Sheu story is the BlackStar News, the same tiny newspaper that exposed the Bernie Kerik scandal, and collusion between the "Kony 2012" producers and the Ugandan dictatorship.

If you have any questions regarding the facts of the Sunny Sheu story, please contact me or Milton at milton@blacstarnews.com